Over this series we’re looking to explain what biomechanics is and make it as understandable as possible while we explore the golf swing and research going on around it. So you get a fundamental understanding of the golf swing from a correctly researched and sourced biomechanical perspective.

BIOMECHANICS – the study of the mechanical laws relating to the movement or structure of living organisms.

Why do we look at biomechanics?

It’s not to a word or study to make things endlessly complicated for no real reason. In fact I think the best coaches are the ones that have such a good understanding of this that they are able to make things VERY simple for students.

That’s a good coaches role. Taking all this info and understanding and making it very simple. Setting up a feedback device or learning environment that helps a student find that solution.

I think we’re still in our infancy. As the systems get easier to use, more and more research will be done and we’ll learn more and more. Dr Phil Cheetham

But understanding this study and research is a good thing. We’re simply trying to understand WHY. Although we might find some truths and concepts that help there’s always going to be some level of variability because we’re all unique from our body types to our golf swings.

What we’re finding is a lot of variability even if we have really good players.Dr Scott Lynn

#1 – To improve performance
Biomechanists are trying to figure out what are some of the keys to improving performance for players. This is where we’ll spend most of our time looking at the golf swing whether it’s teaching players to use the forces in the ground more effectively or looking at the optimal kinematic sequence to maximize power efficiently.

#2 – To reduce injury
This aspect is definitely difficult to look at and follow through with in real the world. Telling players to reduce their performance potential to decrease likelihood of injuries is a line most players are willing to cross.

They want to be powerful and they want to be effective and so they’ll do what it takes and sometimes that crosses the line between performance and injury risk. Dr Phil Cheetham

There’re just so many factors that go into injury. It’s subjective to the individual in terms of their body’s tissues ability to repair itself, to sustain multiple repeated forces over and over again. It becomes really, really challenging to predict… Dr Sasho Mackenzie

Kinetics is the study of forces that produce motion.

We’ll look at the three forces that act on the golf club during the swing. Gravity which acts at the balance point, or center of mass of the golf club. It’s always equal to the weight of the club and it’s always acting straight down.

The second one would be air resistance that resist the motion of the club. The faster the club moves the bigger they get, but have a very small overall impact

The third one are the forces that the golfer applies at the grip with their hands. Those by far and away are the major determinants of how the club moves. Gravity and air resistance pretty small in comparison to the forces the golfer’s applying to the grip.

Also the forces occurring between the interaction between the golfers feet and the ground. All of these are examples of kinetics at play in the golf swing.

Kinematics is the description of the actual motion without regard to the forces producing it.

One aspect of kinematics you might have heard of is the kinematic sequence which is a measurement of the rotational speeds over time (for example – how fast the pelvis rotates).

So by optimizing this sequence we’re looking at getting the most power or energy to the ball as possible. So we go from big muscles to small and release them in a sequential order to get the most effective transfer of energy. 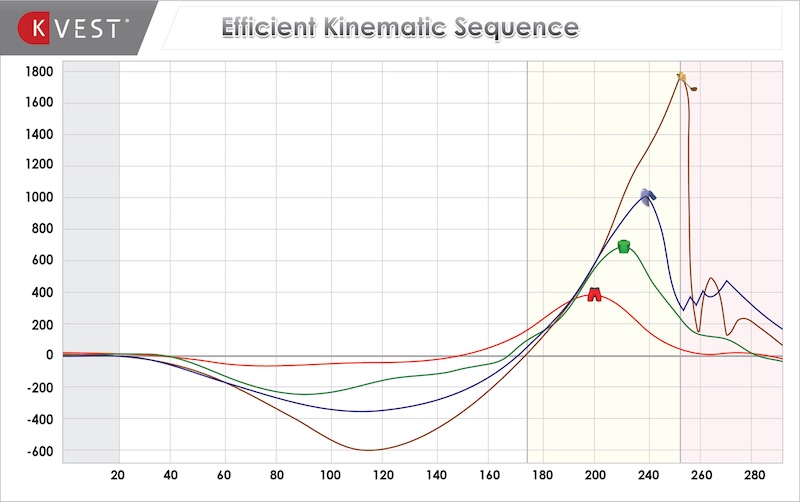 Music Included in this episode:
Drop of water in the Ocean by Broke for Free
Vault by Jahzzar
Bodies by Jahzzar