Why We Need a Revolution in Golf Practice - Roundtable Discussion

We’re going to cover a lot of the myths and misconceptions about golf practice in this roundtable podcast episode with Peter Arnott, Ed Coughlan, and Olly Logan

Here are a few highlights of our conversation and some insights on what you can do to drastically improve the way that you train and practice.

You can’t have the golfer doing a task that they themselves aren’t connected to.

And this goes right back to the Ericsson’s (Dr Anders Ericsson) work in deliberate practice again of relevance. If the athlete doesn’t get the relevance of the task to their performance; you will be there all day and they won’t connect with it properly.

Now, they look like they’re doing it and so on and so forth, but as far as it becoming a new behavior… You’ll get your lovely practice effect that will make it look all shiny and bright on the day of practice. But the performance effect and the learning effect will just not be there, and I think that’s one of the key things.

Here’s an example of watching a coaching a session on Monday, working assistant pro player.

You have to get up and down three times in a row but two of them have to be it within four feet.

You just have to get three two’s in a row and we spent at least two hours on that game alone.

When I asked the player… how you feeling – frustrated, is this feel like competition – yeah. And it took us, two and a half hours in when we found something that was kind a half technical. We just discussed what was happening and I didn’t tell them what to do he just figured out himself. He was like okay, right. Then that was a five-minute conversation back in again.

I’ve spent a large part of my career trying to change techniques as I would call them. Techniques which were solidified in competition because of the pressure of competition.

And people were trying to change it (techniques) under low pressure practice scenarios and we’re just struggling when they came back to competition.

If you want to change something that’s breaking down in competition then you need to try and simulate that pressure and that experience with the practice environment… and to test as to whether that behavior changes has a stuck or not.

If you’re doing that under low pressure context, then you never actually are challenging the new skill that you’ve tried to learn. 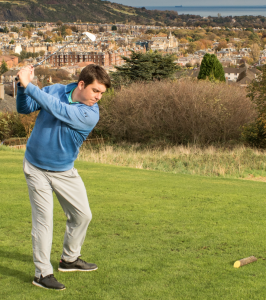 Through years of practical application and research my views are radically different to the main stream golf industries and may challenge some long held beliefs.

I fuse the ‘The Science of Learning’ and real life coaching to help you discover a clear understanding of how to practically apply information shared together.

I am currently just about to finish an Master by Research in Skill Acquisition & Motor Learning, interviewing current European Tour Players on their experiences, enabling me to share these experiences with players of all levels.

I have coached players of all levels, from complete beginner to European Tour player. I also advise and mentor coaches all over the world and have recently branched into other sports, such as the Rio 2016 Gold winning field hockey U.K. Women’s team on effective practice & technique change. I have also spoken at the English Institute of Sport, World Scientific Golf Conference & several universities on how I practically apply ‘The Science of Learning’ to golf.

As a Skill Acquisition Specialist I empower athletes across all sporting dsiciplines to perform their best in competition. Ineffective practice is why most athletes fall short of peak performance. Practice MUST transfer and Skill Acquisition is the route to achieving that. Skill Acquisition is the perfect blend of Coaching Science, Sport Science and Sport Psychology. All three domains are in constant flow during a session as I connect with an athlete to unlock their potential.

In Liverpool I further developed my skills in performance analysis, eye-tracking technology, video analysis and skills testing. I had the opportunity to work with the EIS, GB Shooting, UEFA, Chelsea FC, St Helen’s RLFC, Scottish Curling and many more. I lecture in Sport Science in the Cork Institute of Technology (CIT). I am also a guest lecturer in Skill Acquisition at University College Dublin (UCD).

A high level and professional practitioner working with elite athletes in performance sport. Has provided performance impacting support in biomechanics and skill acquisition interventions as well as coaching for several years with several sports and has been involved in 3 Olympic cycles with Team GB and attended both the Rio 2016 and London 2012 Olympic Games and the London 2012 Paralympic games as with ParalympicsGB.