In this episode of the Golf Science Lab we dive into everything golf shafts, so you can make a better educated decision the next time you’re purchasing a new club and it comes time to select a shaft.

> The height of the shot.
> The curvature of the shot.
> The speed of the club head.
>The direction it’s traveling (hitting it in-to-out or out-to-in, positive or negative angle of attack)
> The orientation of that club head with the face. Is the face open to the path, you know, are you going to slice the ball? Is it close to the path?

All of these variables can be influenced by the shaft of a club and was talk through each step on this episode with Dr Sasho MacKenzie and Liam Mucklow.

Flex and the Golf Shaft 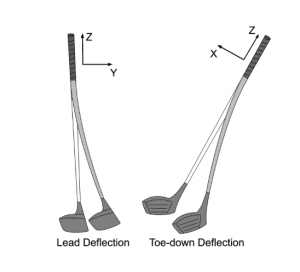 During the swing flex in a shaft causes deflection.   The two aspects of that are lead and toe down deflection, so the club is drooping and leading relative to the grip (see graphic).

This is why you see the recommendation for slower swinging golfers to play more flexible shaft. In general, especially with the driver, you’re going to want to have a higher launch angle with more spin if you have a slower club head speed and typically if you play a more flexible shaft, that’s going to help those parameters.

Shafts don’t have a systematic effect on club head speed.

There’s a general thought that the more flexible shaft will give you more club head speed. There is a variable called kick velocity which shows how much speed is added to club head speed due to the shaft flexing (it’s the rate that the club moves from lagging to leading in the swing at impact in particular).

If you’re swinging two clubs with the same angular velocity the longer the club the more speed you’re going to create.  There’s a little simple equation that says, the linear speed of something is equal to the angular velocity times the radius of that something.

By using a longer shaft it increases the radius thus why the driver is the longest club in the bag.

The heavier the club gets, so the more massive a shaft gets; which [Unclear 0:10:55] overall inertia of the club, the more tendency there is to swing that club out to the right. It just doesn’t seem to want to come in-to-out or out-to-in. So that’s one way the shaft can influence the path

To get the full details on these concepts listen to the complete show below: 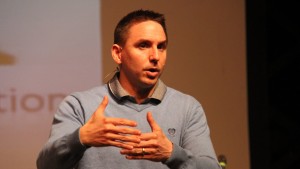 Dr. MacKenzie completed a PhD in Sports Biomechanics at the University of Saskatchewan, which focused on 3D forward dynamics simulation of the golf swing.

He is currently an associate professor in the Department of Human Kinetics at St. FrancisXavierUniversity and his research interests lie in the optimization of human movement with a strong emphasis on sport performance.

His research encompasses both optimal sport movement patterns as well as the most advantageous training techniques. He has conducted, presented, and published research on putting, shaft dynamics, 3D mechanics of the swing, shoe fitting, and the role of center of pressure in the golf swing.

Relevant Research on Golf Shafts
The influence of golf shaft stiffness on grip and clubhead kinematics
The Influence of Clubhead Mass on Clubhead and Golf Ball Kinematics
Golfer Specific Responses to Shaft Stiffness
How does shaft flexibility affect the delivery of the clubhead to the ball?
Understanding the mechanisms of shaft deflection in the golf swing 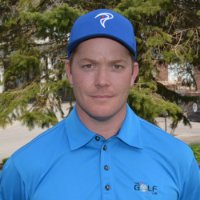