Learn how your eyes influence your body and specifically putting. We’ll walk through what you should be doing with your eyes and a solid pre-shot routine to get you making more putts this season with Dr Mark Wilson.

What are the differences in eye movements between expert putters vs novices?

We get people to wear eye-tracking equipment that tells us what they are looking at while they are putting and we can see the disruptions in their eye movements effect the way in which they control the putter and ultimately how accurate they are with the putting itself.

Experts compared to novices have longer Quiet Eye duration, so that means they look at the ball for a longer period of time during the preparation for the stroke and during the actual stroke. They don’t move off the back of the ball, and then as they hit the ball, they often keep their gaze there.

We find that experts use that technique and novices have a much more scattered eye movement plan.

They don’t keep a focused gaze on the back of the ball, they let their eye movements jump around, they might follow the putter as it’s moving and they often start looking towards the hole before they have even made contact with the ball.

What was interesting was that when you compared the first putt to the second last putt (the second to last putt was the last putt they holed and the very last putt they missed) we could see this big drop in the Quiet Eye duration, that ability to keep their focus tight on the back of the ball.

Basically that meant when they missed, they started looking way from the ball before they had completed their swing. They didn’t maintain that steady fixation all the way through contact. This is one of the simple tips from this study, “Look at the ball as you putt”.

If you want to create less chance of missing, it would be a good idea to maintain that focus on the back of the ball because especially under pressure, when your attentional systems are all being distracted.

Anxiety makes us more distractible so it’s harder for us to maintain this focus when we are thinking about the outcome, or how we should make the stroke, all these things are fighting us, while we are still trying to maintain this goal-directed focus on the back of the ball all the way through the putt.

We have now got some hard evidence as it were that this seems to be what happens when people miss.

Let’s give your putting stroke as much chance as possible through visual motor control in terms of the Quiet Eye so you feel more confident, and make a better putting stroke.

#1 – What I would suggest is that when you are standing over the ball take a deep breath and push your breath out.

#2 – Make sure your putter grip is light, then take a hard focus on the back of the ball, laser-like focus, pick out a dimple, pause until you are ready to go and then swing.

Make your putting stroke, but the entire time focus on a dimple on the back of the ball.

Make a putt and as you are looking at the ball, don’t look up as you make contact.  And before you look up give it a quick rating out of ten and then look up and see how you did.

I am interested in making sure that golfers give themselves the best chance of executing the putting stroke that they want, and unfortunately anxiety often disrupts that. 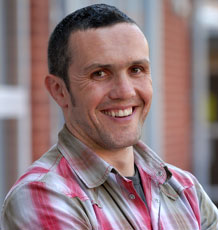 Dr Mark Wilson is an associate professor in experimental psychology and human movement science interested in the processes underpinning skilled performance; why skills might break down under pressure; and optimizing the skill acquisition process.

He is a chartered psychologist and registered practitioner with the Health and Care Professions Council, and provides psychological support services in a range of performance domains.

His research seeks to advance psychological theory (in perception, cognition and action), while directly relating to applied problems. As such he attempts to incorporate knowledge from a range of specialist areas, including cognitive psychology, psychophysiology, motor control, motor learning, perception-action, sport psychology, and cognitive neuroscience.