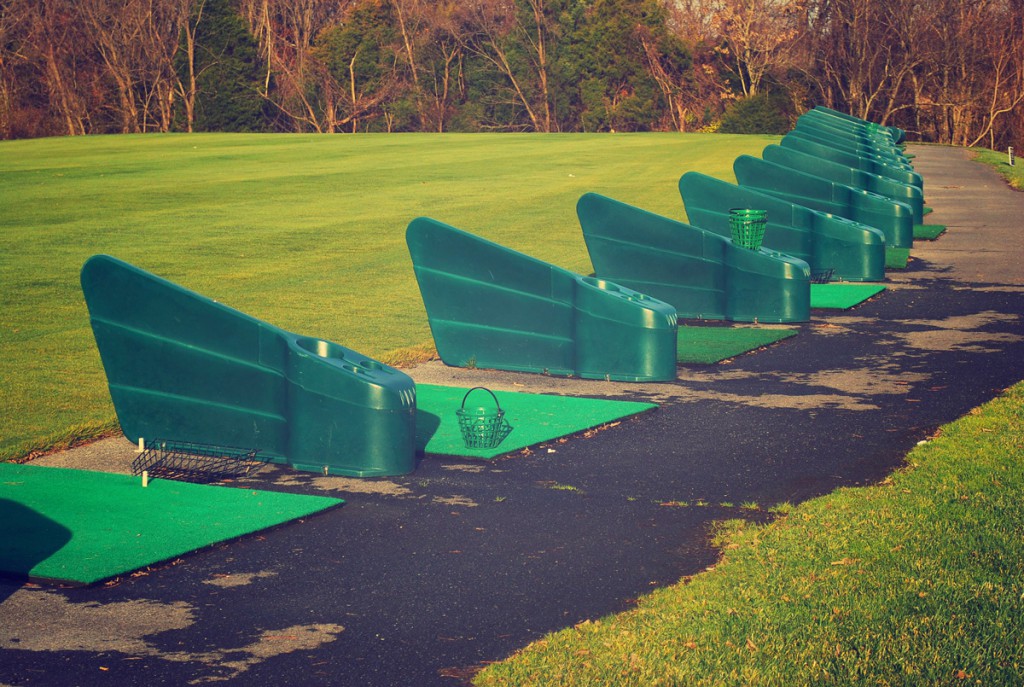 John Kessel is the director of sport development for USA Volleyball and joins us today to talk about the importance of learning and some of the most important principles they’ve implemented with the US Volleyball team we can transfer to golf.

The way we learn and practice has drastically changed over the last twenty years and has become clear on how to retain skills. Retention is the ability to remember on Saturday, what was learned on Tuesday, and something most golfers are familiar with while being frustrated with the lack of transfer from range to the course

When you learn things intrinsically they are retained far better than when you are simply told what to do.

Most likely you got on the bike, you wobbled, somebody held you up and all of a sudden you were off.

When all is said and done if you haven’t ridden a bike in five years you are going to get on and wobble for a few seconds but then you will just take off. That is learning intrinsically. It is far better to figure it out on your own rather than being told what to do.

The value of an instructor or coach is to take their wisdom and guide the student to figure things out on their own. This is guided discovery and the retention of that form of teaching is almost as good as if the student had figured it out themselves.

Question for coaches – How do I become the best guided discoverer for the athlete so they can solve the problem when I’m not there.

John explains that doing something in a row is far less efficient in teaching and learning then having the skill done over and over. Its like your brain goes on auto pilot and the ability to produce synapses shuts down because you’re doing the same thing over and over.

When you randomize and add spacing during practice, you have to relearn the task or redo it with only a piece of what you remember which is ultimately strengthening, by means of stimulating, the connection a synapse created. This allows your brain to retain the information far better and enhance the changes in movement faster, which is why some call the connections “super highways”.

We learn by doing not by watching. 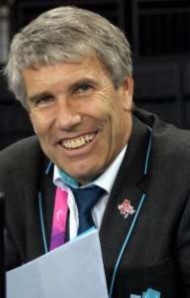 Since 1985 John has been working for the National Governing Body of the sport, USA Volleyball (USAV), now as Director of Sport Development. He currently serves as the staff liaison for Disabled Programs, USA Deaflympic Teams, Starlings USA, National Parks and Recreation Assoc., the YMCA and over 30 other Affiliated Organizations working with USAV. He is Secretary of the NORCECA Technical and Coaches Commission, and Director of Development for World ParaVolley. He was Team Leader for the 2000 USA Olympic Beach Volleyball Teams in Sydney, which brought home one gold medal, and for the 2004 USA Paralympic Women’s Sitting Volleyball Team in Athens, which came home with the bronze medal. In 1995, Volleyball Magazine’s special Centennial issue named him one of the 50 most important people in the sport in the past 100 years. In 2013 the American Volleyball Coaches Association inducted him as their 60th member of the AVCA Coaches Hall of Fame.

John has been coaching since 1971 at the collegiate level or above, including Women’s U.S. Open titles in 1986 & 1987. A sought after international lecturer, he has conducted seminars in all 50 states, and in over 50 nations, including China, Denmark, Bolivia, Thailand, Qatar, United Arab Emerits, Cook Islands, Barbados, France, Germany, Egypt, England, Italy, Argentina, Lithuania, Japan, Iceland, Puerto Rico, Western Samoa, American Samoa, Canada, Guatemala, Venezuela, Greece, Israel, Australia, Jamaica, New Zealand, Holland, England, Belize, Trinidad Tobago, Ireland, Tonga, Belgium, Haiti, Vanuatu, Costa Rica, Fiji, Poland, Nicaragua, British Virgin Islands, Vietnam, and El Salvador. He is also a busy author, with over half a dozen USAV books, including the IMPACT coaching manual, the Jr. Olympic Volleyball Program Guide, and most recently Minivolley 4 Youth, the Youth Coloring Book, and countless articles. His blog called “Growing the Game Together” is the second most popular blog of the hundreds found on the US Olympic Committee’s Team USA website and he promotes the “Grassroots” Button on the USAV website with material, videos, posters, and information for clubs, schools, coaches, parents, players, and officials. He has received many other awards, including USA Volleyball’s Honorable Mention in 1978 and 1986, the Harry Wilson Distinguished International Service in 2004, the George Fisher Leader in Volleyball in 2006 and in 2007 was named a Sport Ethics Fellow by the Institute for International Sport.

From 1982 to 1990 Kessel was Director and Coaches’ Coach of the Albuquerque Junior Olympic Volleyball Program. For a month in the summer of 1991, he was one of four featured speakers at the first ever International Youth Volleyball Coaches Symposium in Olympia, Greece, attended by over 50 nations, and he repeated that role in the International Volleyball in the Schools Seminar in Canada in 1995 and 2007 and in Thailand and Vietnam in 2013 and 2014. During the Centennial year of volleyball he was the principal speaker at the Centennial Advanced Teaching and Coaching Seminar in Beijing, China. He was on staff for both the 1984 and 1988 Olympics, and served as producer for both the 1996 Centennial Olympics for indoor volleyball in Atlanta, and subsequently producer and announcer for the 1996 Paralympics in Sitting and Standing volleyball. For 1999-2000 he was director of the U.S. Olympic Challenge Series, the Olympic qualifying series, which included an FIVB World Tour Grand Slam stop in Chicago with $400,000 in prize money for that one stop alone. He also served as head coach/team leader for the 1999 and 2003 USA Pan Am Games Beach teams, with a silver medal, and 4th and 5th place finishes in the four events. In 2004 and 2005, he directed the National High Performance Beach Camp, worked his 10th US Jr. Olympic Beach Volleyball Championships for USA Volleyball in Hermosa Beach, an event he started in 1994 with Dale Hoffman of the California Beach Volleyball Association, and worked with the AVP.

For over a decade John served as one of 8 members of the International Volleyball Federation’s Technical Commission, as Secretary, and he remains a FIVB Level IV Instructor. Since 2001 he has served as Secretary on the NORCECA Technical and Coaches Commission, developing clinics and the “Leave a Ball Behind” Program to enhance zonal volleyball growth, and directed a two year State Department Sports United Grant to assist coaches in six NORCECA nations in 2011-12. He helped run the World Sitting Volleyball Championships in 2010, and the Director of Development for the World Organization of Volleyball for the Disabled (WOVD – now known as World ParaVolley) for 2012-2016. He served on Jury at the London 2012 Paralympics for Sitting Volleyball, in 2014 for the ParaVolley World Championships and will again in 2016 Rio Paralympics.

Kessel pioneered USA Volleyball on the Internet, helping the late Tom Jack develop the original site, one of the first 1,000 websites listed on Yahoo, and still contributes the usenet group Rec.Sport.Volleyball. He is an administrator of the 7,500 closed member Facebook page “Volleyball Coaches & Trainers” and an advisor to the website TrainUgly.com. From 1987 to 1991 he was the tournament director for the U.S. Jr. Olympic Volleyball Championships and began the U.S. Junior Olympic Beach Volleyball Championships in 1993, directing them until 2000. He also designed and directed the Nike VolleyVan program with 4 years of daily clinics in the lower 48 states, and currently directs the MVP project, working to get a “Million Volleyball Participants” connected to USA Volleyball. For that, he developed a series of CDs, with animated drills, skill posters, videos and dozens of articles for growing the game for youth, juniors and adults, now containing 7.5 GB of information on the 2013-2016 USAV Sport Kit DVD, and created a follow up SportKit DVD for World ParaVolleyball specific to the sitting game.

As a player Kessel has participated in 16 U.S. Open Championships, and was a 7 time Regional Champion. He also played professionally with the Denver Comets in the old International Volleyball Association, and a year in Italy for the Alessandria Volleyball Club. Recently he competed for the Time Lords in the 55 & over division, 36 years after his first US Open in 1973. In 2004, he finished in the top 15 of the Men’s BB in the USA Outdoor National Championships, playing with his son, Cody, and has won several King of the Mountain Father – Son Doubles tournaments in Colorado. He returned to Junior Olympic Volleyball coaching when his children wanted to play, and his daughter McKenzie’s 13 and under team with Stellar VBC won the Bronze medal at the 2007 US Jr. Olympics in Minneapolis, MN. She was a member of Cheyenne Mountain High School’s volleyball team which won four straight state titles in 2008-2011 and now plays for Bowdoin College 2012- 2016. John coached his son Cody’s 2010 Palmer High School team in the Colorado State Boys HS league. Cody was a member of the 2010 USA Junior National Training team, and was a starter for Princeton’s men’s varsity program, making All American three of his 4 years, leading the nation as a freshman and senior in kills per set. He is now playing professionally in Switzerland after captaining the USA World University Games team and playing for the USA Men’s B side in the PanAmCup. Last summer Cody also become the youngest doubles player in 42 years to win the Aspen “MotherLode” men’s Open, and Atlantic City “Big Shot” Open, plus 10 other Beach Open events in the west, and obtained his AAA rating when he took second in the Hermosa Open. John also has coached lacrosse for the Cheyenne Mtn LAX Boys and Girls teams since 2000.

His main goal is to help make all coaches more efficient, positive and creative, no matter what level – 7 year olds in an elementary school program or National team players and programs. He challenges old ways of thinking and help coaches create what they need, while having fun in the process. John has a BA in Biology and Economics received from The Colorado College in 1974, and since 1996 he has been a single dad, raising his kids alone. His pastimes beside volleyball include fly-fishing, writing, skiing, lacrosse, mountaineering, upland game hunting, deep-sea fishing and travel.