We sit down with 2017 World Long Drive Champ, Justin James to hear about his development, how he learned to hit the ball so far, and what he’s doing today to train more effectively and get even better.

How to Hit it Far

Well, I grew up on a driving range. I didn’t grow up on a country club, I didn’t get to play as much, number one. And then number two, I kind of had honestly, a lot of raw talent. It was hard for me growing up when I hit, I hit it like 300 yards when I was 12.

As we’ve talked about on previous episodes environment has a big impact on the development of a player.

In this episode we learn about the environment Justin grew up in and how it was the perfect breeding ground for Justin to do what he does today as a long drive competitor.  Then Justin walks us through his current training regimen and the balance of time he spends in the gym vs on the course.

We also dive into technique and some of the swing thoughts and concepts Justin uses to gain power. Many of his technical thoughts involve the way he’s interacting with the ground. Watch this awesome video below to learn more with this swing breakdown from instructor Grayson Zacker.

One of the factors for power Justin talks about (and recommends to everyone) is getting his pressure on the trail foot in the backswing. You’ll see that very early in this video.

FROM THE INTERVIEW: I think if someone’s listening and thinking, “Okay. How do I increase my ball speed?”

It’s not that difficult to do. Most people don’t ever go out and actually swing the driver hard.

I recommend getting a little affordable launch monitor and go out once a week to the driving range, tee up the driver and hit as hard as you can for an hour or 30 minutes.

As your ball speed increases, you’re going to be able to see the instant feedback and see what 161 feels like, see what 165 feels like. You’re literally teaching yourself how to gain more power.

You’re basically creating a bigger engine. It’s a lot easier for a Ferrari to go 70 miles an hour than an old Toyota Corolla. There’s a lot more wear and tear on the old Corolla’s engine. If you’ve created a bigger motor, all of a sudden you go out to the golf course and you can hit it 270 yards or 300 yards a lot easier than you did before with more control and more accuracy.

Same thing with baseball… Justin Verlander can throw a ball probably 105 miles an hour when he’s really heated, but he pitches at 98 or 97 miles an hour.

This is the same thing we want to do, we just want to build a bigger motor. It involves the fitness work, but it also requires you going out to the course and actually opening up and throttle and seeing what you got. 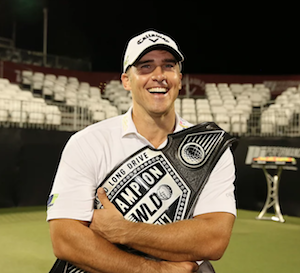 Two years later, James was ranked 6th in the world after his rookie season and 3rd place finish at the 2016 World Long Drive Championship. Soon after, the snapping turtle persona was born in a golf channel profile. James would finish his sophomore season at number one in the official WLDC ranking after winning 3 times, including his first world title at the Volvik World Long Drive Championship.

Boditrak Sports is a leading-edge sports technology company, focused on the interaction between an athlete and the ground. BodiTrak Sports is a sister company to Vista Medical, who developed the pressure-sensing technologies used in our products. Vista has been active in the pressure sensor production business since 1995. All of our products are (proudly) manufactured in Canada.

Their products give teachers, coaches and golfers the tools to visualize and better understand the golf swing, to make improvements and track success.

Make sure to check out their new certification program. A comprehensive education platform on an athlete’s interaction with the ground and golf performance, designed by the leading minds in the industry.