We’re joined by two of the top coaches in the golf industry on this podcast, Pia Nilsson and Lynn Marriott of Vision54.  We talk about their work with Ariya Jutanugarn and tell some of the stories and tactics that they’ve utilized on her journey to Number 1 in the world.

“The main thing is for players to understand what it is they can control and what they can’t..

Anyone one who wants to be a good competitive player needs to zero in and be best in the world at the things that they can actually take action on. It’s one of the core things that Ariya was brilliant on.

Ariya is still young, but she’s learning and that’s actually what really happened at the 2018 US Open, because it was slipping away from her and she got stressed and nervous and quit committing to what we call her thinkbox and playbox.

BUT she caught herself.

When you have a seven shot lead with nine holes to play, the viewers and even the commentators were like, “Oh, this is a done deal.”

But with Ariya, it’s something that she’s grown into this awareness of when she’s not there and she’s really more into wanting to hit a really good shot or get a good outcome. ”

Listen to past podcasts with Pia and Lynn:

Human Skills x Technical Skills = Performance w/ Vision54
Instead of Trying to be Consistent… Do this! w/ Vision54
What’s the Best Mindset for Golf? w/ Vision54
How Close are we to Someone Shooting 54? w/ Vision54 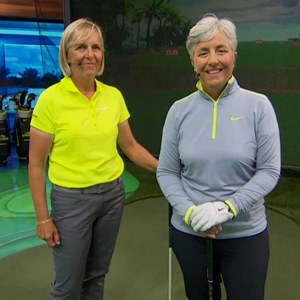 Lynn Marriott & Pia Nilsson are co-founders of VISION54, a breakthrough program and golf school based at Talking Stick Golf Club in Scottsdale, Arizona. Lynn and Pia are internationally recognized, are the two highest ranked female instructors in America, and are both regularly featured among Golf Digest’s Top 50 Greatest Teachers.

They are the authors of four best-selling books, including their newest release Be A Player.

About BE A PLAYER

I’ve really enjoyed going through this book and can honestly say it’s something I’d hand to someone just starting the game and an experienced pro. The lessons and approach to improving your golf game through things like the human skills, performance states, and frameworks for improved thinking make it a timeless manual.

You’ll be guided through the research, stories of Lynn and Pia’s experiences working with PGA and LPGA players, and then given tons of great explorations to go through.

Be a Player: A Breakthrough Approach to Playing Better ON the Golf Course