One of the highlights of the 2016 World Scientific Congress of Golf last year was Gene Parente. Gene has a golf testing business (Golf Laboratories) that started in 1990 with a machine that was powered by a garage door spring.

This has since evolved into the ‘Go-to Robot’ that is used by all the US-based major manufacturers for equipment testing. The Robot (Eldrik) is powered by Lithium ion batteries and is capable of re-creating any kind of golf shot and launch conditions.

Eldrik was put to test on the “Bear Pit’ 168 yrd par 3 at the Waste Management TPC where it was tasked with getting a hole in one in front of 20,000, mostly alcohol infused fans. If the Robot didn’t feel any pressure, you can be sure the Gene did, especially when the first ball was a miss and it takes 45 minutes to fully adjust the robot.

Incredibly, the short-cut solution was to adjust the position of the ball so that the club made contact on a different location on the face. This quick thinking and deep knowledge of launch conditions resulted in this remarkable hole in one.

Eldrick is very accurate and highly consistent which you would think makes him pretty hard to beat. That is until you consider that one small change in external conditions could result in him missing the ball altogether. A change in slope or lie would throw the machine completely.

It is hard not to be thoroughly impressed with robots like Eldrik but what they highlight for me is just how impressive we are at tasks of general coordination which can then get honed into high-level motor skill and dexterity.

In contrast to Eldrik, we never make the same swing twice (even on the range).

Swings that feel the same from trial to trial in-fact, vary in…

Because Edrik is built for one purpose only, the designers can limit the degrees of freedom (separate points at which the robot can rotate, hinge, thrust etc*). We, on the other hand, have an infinite number of degrees of freedom (DOF) that need to coordinate and synergise to suit the motor challenge.

While this affords us great versatility it does raise the question of ‘ with an abundance of options, how does the central nervous system (CNS) know which combination of DOF to use?

This question has been labelled the problem of ‘Motor Redundancy’ or after the forefather of motor control studies, the ”Bernstein problem,’ and has baffled scientists since it’s inception in the 1920’s. 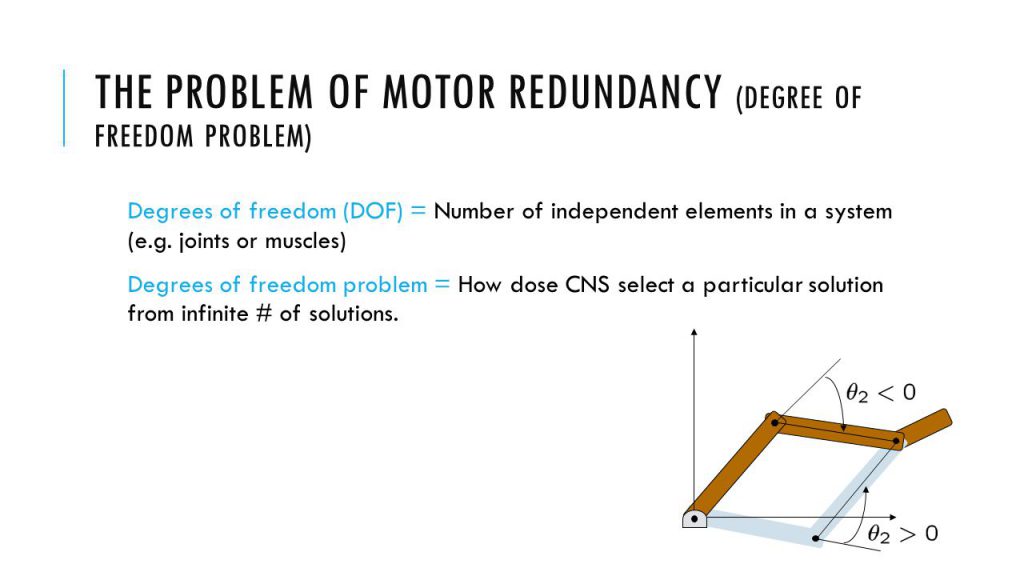 How we can then perform a repetitive action like the golf swing with any consistency is characterised by the Russian scientist, Nicoli Bernstein, with his now famous hammer & anvil study in 1920’s. The image depicts a blacksmith hitting the anvil with the same (minimal variance) trajectory every time. What was of interest is that the path the hammer takes varies considerably but delivers a very similar blow every time.

This ‘endpoint funneling’ effect of the hammer always returning to the same trajectory from different locations has been corroborated in studies on table tennis players and has been coined ‘repetition without repetition’. This is certainly a pattern that any golf coach would recognize.

Traditionally, movement variability has been seen in the golf industry as a negative factor with golfers striving to be more like Eldrick the Robot. However, a more contemporary understanding of motor control welcomes positive variability in the swing. With this paradigm shift though comes a much more complex task for golf coaches.

It is no longer good enough for the coach to compare his pupil with his favourite tour model and make him look just like him.

We now need to understand in what areas the student is synergising, i.e a strong grip ‘often’ leads to a more ‘rotate and block’ release pattern. If you change this grip then you had better be prepared to change the release pattern or aim a long way to the left. These are often called the ‘matchups’ and underlie what makes the player’s swing work.

All this movement variability is present within the same task/shot requirements. To play this game though, we need to adapt our movement from shot to shot with sloping lies, change of club, wind adjustments etc.

It is this high level of task perturbation that makes golf so hard to learn and in my opinion, deeply rewarding to play. It does bring into question our practice/learning methods and act as a rich field of study for anyone interested in human movement adaptation.

Below is a video that I made as part of a series on motor control. It is a bit nerdy but does begin to explain why we are so inconsistent in our performance.

So on a single task with fixed parameters, Eldrik would win hands down. Given the multitude of shot requirements and the ever-changing environment, you would beat him/it at golf every time.

Dr Noel Rousseau
Noel Rousseau is a specialist golf coach who as you would expect, places great value on the development of high level technique. Understanding how we learn and perform such movements is a key part of Noel’s day to day work with his clients and through his research. Beyond this, there are a multitude of factors that influence a golfer’s development, not least, the role of mindful attention during shot execution. Noel’s research into motor learning and automaticity has shaped his unique insight of how a complex skill is learned and performed. This level of insight into learning is what inspired Noel to create his award winning coaching apps which can be found at www.noelrousseaugolf.com