In this episode we talk about the phases of participation every golfer goes through when they get into the game and how to best manage them. It’s critical to understand the different needs of a golfer to set up the best learning environment possible to avoid burn out and get the best results.

This is where players are introduced to the many aspects of the game in its entirety in a very open, engaging, and non-intimidating game like way. Measures are taken and scores are recorded, however, they are not shared or discussed too much extent in an attempt to reduce the possibility of creating unrealistic expectations. Praise and applause are given in response to the efforts that are being made. Carelessness is pointed out to the player in a very un constricting way. Smiles are given often and rewards are a must. At this stage, instruction is very informal yet personal.

Measures of achievement are of no concern; it is all about engagement

Measures of achievement are of no concern; it is all about engagement and exploring the wide varieties of the sport. Teachers are more than just teachers; they get involved with the player and with that the player gets more involved in the sport.

‘Based on interviews with elite performers and their parents and teachers, Bloom (1985b) found that future elite performers were typically exposed to the domain initially under playful conditions as children (See Stage I in Fig. 1.3)’. (The road To Excellence, Dr. K Anders Ericsson.)

The image below is the Fig. 1.3 Dr. Ericsson was referring to. 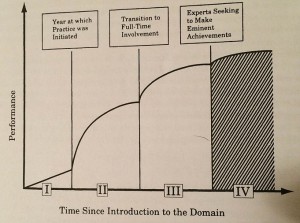 Students learn through fun games. Curiosity then gets the better of those who begin to feel the desire to learn more. Suddenly they become more skilled and begin to explore. It is this exploration that leads to the discovery of vital areas such as principles, rules, and history. It is at this point where the sport gets a little more systematic for the student. Discipline is self-regulated and intrinsically established from this point onwards. For some, it has been known to be a dramatic moment, in which the student makes a shift from “all fun” to active study. This leads us to phase two, but before we discuss phase two in depth we must understand the transition.

The transition can be seen through students’ minute differences in behaviour, both in and out of training. Early arrival and later finishes, extra workouts and extra questions, more communication etc. Subtle, but clear. Through this transition students who have already decided to start acting and thinking more seriously about playing golf can be prodded, prompted, encouraged and supported by parents and teachers.

It is at this time expert teachers should seek out other expert teachers, particularly those possessing different characteristics to their own, i.e. a stricter regime, mandatory extra practice hours, or more structured study time. These types of teachers find ways to keep some form of notes for their students. Practice schedules are now outlined, weekly accomplishments are always marked, gold checks or stickers are awarded when tasks have been completed and the appropriate competition is necessary.

‘At some point, normally in the early or mid teens, future elite performers in music and sports made a major commitment toward reaching the top level in their domain. This was often associated with seeking out a master teacher and optimal training conditions, which sometimes required the family to move geographical location’. (The Road To Excellence, Dr. K Anders Ericsson.)

Somewhere in the transition students must become possessed by golf and have the sudden desire to play, excel and compete. The initial interest has been fostered, cared for and is now becoming inspired to evolve. Students begin to work and spend tremendous amounts of time fine tuning detailed aspects of the skill. The stage one applause turns into knowledgeable criticism from teachers, feedback during practice and competition results.

Students must become possessed by golf and have the sudden desire to play, excel and compete

Practice takes a dramatic change becoming very long and very detailed whilst concentrating on those small details. The teacher at this stage expects more from their students and holds them to much higher expectations. The change towards instruction is now more rational and formal and less personal. Specific skills and vocabulary have become a core part of practice. Results from tournaments and training are used to plan future practices with the goal of accelerating the learning process.

The relationship between teacher and student from the early stages to this stage has now shifted from a simple connection to a deeper respect. At this stage, students learn their techniques and hone their skills by incorporating the four cornerstones during practice to best reflect what they may experience during tournament play. An issue that golf has faced for a number of years, hitting an all-time high last year (2014) with 400,000 people leaving the sport, can be helped if we understand this particular element at this particular stage of participation: technical mastery has to be taught intelligently, not mechanically. Instruction is designed to stimulate intellectual eagerness and awaken an intensified desire for intellectual activity and knowledge. Although at this stage students are guided in the direction needed to reach higher levels of performance, they are still expected to take an active role in problem-solving.

A reciprocal respect starts to grow at this stage where teachers find themselves working with students who could become very accomplished golfers. Students also find themselves working with teachers who are highly dedicated and appreciate the commitment. A relationship at this stage flourishes far beyond infrequent lessons. Teachers are to encourage and inspire students to take part in public competitions by providing extra help in preparation, putting in extra hours and even occasionally transporting students to their events. These competitions will provide the answers to many of the questions outsiders will have about why these students are committed to such demanding practices.

Golfers will spend multiple years at this stage developing a plethora of skills and their identity even though they are not at an expert level.

This is where the focus now shifts to a player creating their own personal game based on his or her strengths. Here golfers transition from technical precision to personal expression. Interviews of expert coaches in different sport related domains state that they teach young people for a number of years and they end up playing very well, but then they suddenly plateau when they have to do something by themselves.

Others also state that students are great imitators and that it is fine if it’s a stimulant, but not if it remains as a product. Everybody learns by imitation of some sort, but the goal is to then make whatever we learn our own. Golfers at this stage develop the ability to take charge of their own development while working with expert teachers who are amongst the most respected in their field. These teachers were not necessarily expert performers themselves but have been around and exposed to the intricacies, demands and attributes of said expert performers.

It is the teachers prior to this stage that have given golfers the opportunity to be in a new environment and around coaches who have the experience working with elite level players. Interactions now become incredibly different. Students are expected to practice more than before, approximately 4-7 hours a day. Teachers do not tolerate sloppiness or laziness and will generally show their disappointment instantly when students have not met specific standards. Work assignments require a lot more time and attention. Students have been known to say that they were terrified before lessons or in tears afterwards. One student, in the music world, described his interaction with a teacher at this phase by expressing the following;

“He was an impossible taskmaster. It was incredible. He would just intimidate you out of your mind. He would sit there… You played a concert, you didn’t play a lesson. You walked in prepared to play a performance… You would get torn apart for an hour.” (Developing Talent In Young People, Benjamin S. Bloom)

It is the esteem that kept the students going through the new way of working. The new ways of working meant sacrificing some of the details that were so important in the earlier stages, and directing focus now towards feelings, meaning and expression. Rather than looking at certain aspects teachers now help students see the bigger picture: the broader and more generalized styles of their game. Master teachers at this stage try to impress upon students’ notions that no two golfers should ever try to play the exact same way. Rather, it must reflect the golfer’s most careful intentions and emotions.

Final thoughts:The time that the student becomes their own best coach and their biggest critic is inevitably and undoubtedly the later stage.

Tips:
It is a good idea to have students at the same stage grouped together or living together as they share the same commitments – this can help stimulate challenge. Theoretically it would help if you had a small team of coaches that could offer their expertise in these 3 phases providing a pathway for students to work through.

Phase #3 tip: Competitions should be entered with the career in mind allowing plenty of time for rigorous preparation. Students are getting exposed to inspirational and internationally known athletes, which will prove to be useful in years to come.