In what state do we play our best golf… Should be trying to be left brain, right brain, high, low?!?

Today’s guest Dr Debbie Crews shares what she’s found in her 30+ years of research on performance and what you you need to understand to play your best golf. Listen in below!

No matter if it is gun-shooting, archery, golf, breaking a board in karate the left hemisphere of the brain should quiet in the seconds just prior to moving.

“I kept seeing this pattern of synchronicity; so as the left side of the brain is quieting in the last second right before people move, the right may become slightly more active, but what you achieve is balance or synchronicity in the brain, and it was the last second of data that was predictive of performance.” 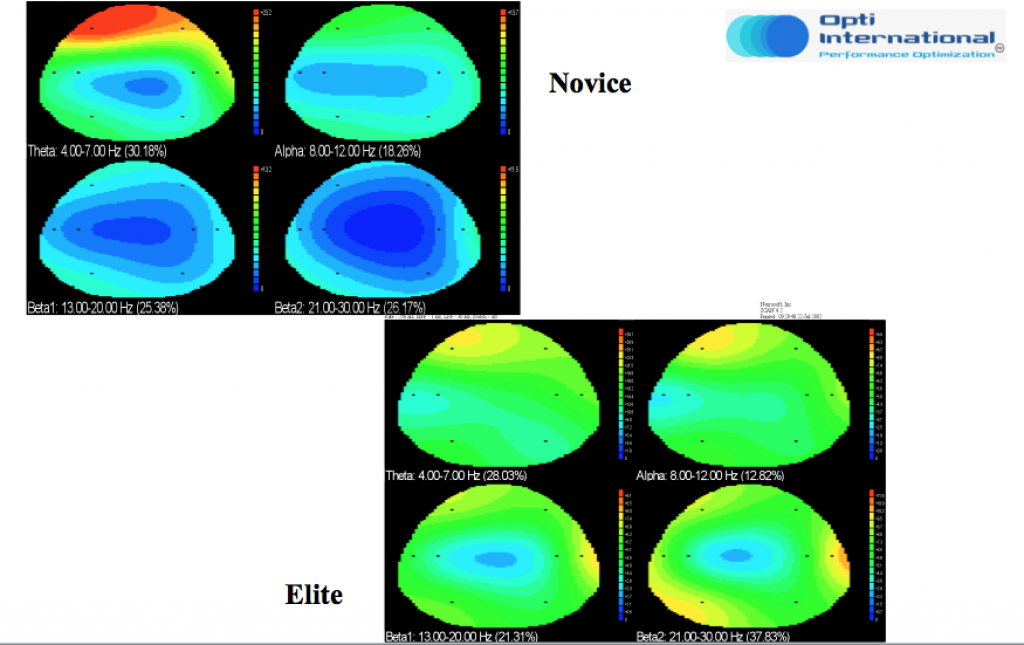 Behind the ball they may be seeing that shot, assessing, conditions, etc. which is going to be more of a right-brain activity. Then, they’ll get finished with their decision-making and getting their motor program in place, and then from there, they walk up (still doing important processing); setting the club, looking to see if the alignment is correct etcetera, which all involves both sides of the brain.

Then, they’ll get finished with their decision-making and getting their motor program in place, and then from there, they walk up (still doing important processing); setting the club, looking to see if the alignment is correct etcetera, which all involves both sides of the brain. Eventually, the left side of the brain needs to quiet, so that you are going to go more with automatic processing for performance.

Then, they’ll get finished with their decision-making and getting their motor program in place, and then from there, they walk up (still doing important processing); setting the club, looking to see if the alignment is correct etcetera, which all involves both sides of the brain. Eventually, the left side of the brain needs to quiet, so that you are going to go more with automatic processing for performance.

Often times, the activity in the brain can be higher, but if it is very synchronized in that last second before they start their motion, they perform well. When you think about athletes if they are coming to the 18th hole for their career-best round, they are going to have some adrenalin and their heart rate is going to be a little elevated and that is okay as long as they can still synchronize that activity in their brain.

Characteristics of Golfers that get “Synchronized”

They are forward-thinking people; it’s what’s in front of me, what’s next, what can I do better? They don’t do all the comparisons everybody else does, that’s kind of more their personality style, in my opinion.

In terms of brain patterns, they don’t question, ‘will this go in’ or ‘will I perform well today’ or whatever it happens to be, for some reason, that seems to be missing in those people. They just perform and they are always moving forward.

Putting golfers on a balance board and then I’d also a bike to get their heart rate up high and many people performed better when you do that because they have more to focus on.

“The brain maps indicate that it works pretty well.  We did a study on Scientific American Frontier with Alan Alda, and that’s what we did on the show with him. We put him on a balance board and a bike, and he actually did the best on the bike because he could relate it to his acting state and as soon as he got his acting state in his mind, he was sinking a lot of putts.”

Dr. Debbie Crews is a Sport Psychology Consultant for the Arizona State University (ASU) Women’s Golf Team and a Faculty Research Associate at Arizona State University. She is also a Master Professional in the LPGA Teaching and Club Professional (T&CP) and serves on the LPGA National Education and Research Board. Debbie has been an LPGA National Education Program (NEP) Instructor since 1997 and has assisted with the development and research for LPGA teacher education programs. She received her B.S. degree from the University of Wisconsin – Madison in 1974 and her M.S. and Ph.D. from ASU in 1980 and 1989, respectively.

As a scholar Debbie has conducted over 30 years of research in golf. She has studied the behavioral, cognitive, and psychophysiological variables that lead to optimal performance. Specifically she has studied attention in golf, examining brain and heart activity, both of which are indicators of attentional focus. During the final seconds prior to performing the motion, these are the only measures that accurately assess if the performer is in an “automatic” state for optimal performance. She has been able to define this successful state and has used biofeedback training to facilitate learning to produce this state. Her golf research has been published in research journals (i.e., Medicine and Science in Sport and Exercise), in published proceedings (i.e., Science and Golf II, III, and IV), in applied journals (i.e., Scholastic Coach), and in the popular press (Golf Magazine, Golf Digest, Newsweek, The Wall Street Journal). She was recently selected as #8 among America’s Top 50 Women Golf Instructors by Golf Digest.

NBC Dateline and Scientific American Frontier have illustrated stories about Debbie’s research. She received the first Science in Golf Award from Golf Magazine (2001) for her research on choking. Collaborative ventures include several studies on the “yips” in golf with the Mayo Clinic, an imagery study using fMRI measures with the University of Chicago, and a vision/EEG study in conjunction with the University of Calgary. Her research has led to the design and patenting of a golf putter that aids in alignment, balance and performance and to a patent pending feedback system for golfers.

In 2001 Debbie held the Future of Golfers (FOG) conference in Phoenix, AZ as an interim conference of the World Scientific Congress of Golf (WSCG), St. Andrews, Scotland. She has served on the Steering Committee of the WSCG since 1995 and in 2008 and 2012 she held the WSCG conferences in Phoenix, AZ. As of 2008 she is Chair of the WSCG and in 2012 she founded the International Journal of Golf Science (published by Human Kinetics). She was the Editor of the journal from 2012-2014.

In 2011 Debbie founded Opti International, a feedback company for optimal performance. OPTI stands for Optimal Performance Through Integration and has the goal to help you become “Better Than Your Best.” She patented the algorithms that are used for the feedback training to create balance in the mind and body. This is her second patent. The first was a unique putter that was also designed to create balance.

As an applied sport psychology consultant, Debbie has assisted the ASU Women’s Golf Team since 1979 and the ASU Men’s Golf Team from 2007-2012. In addition, she has assisted many LPGA and PGA professionals as well as elite amateur golfers. Debbie has published in numerous research and applied journals; has presented at over 100 professional, invited, and public meetings; and has solicited over 25 grants and funding donations for her research over the past 30 years.