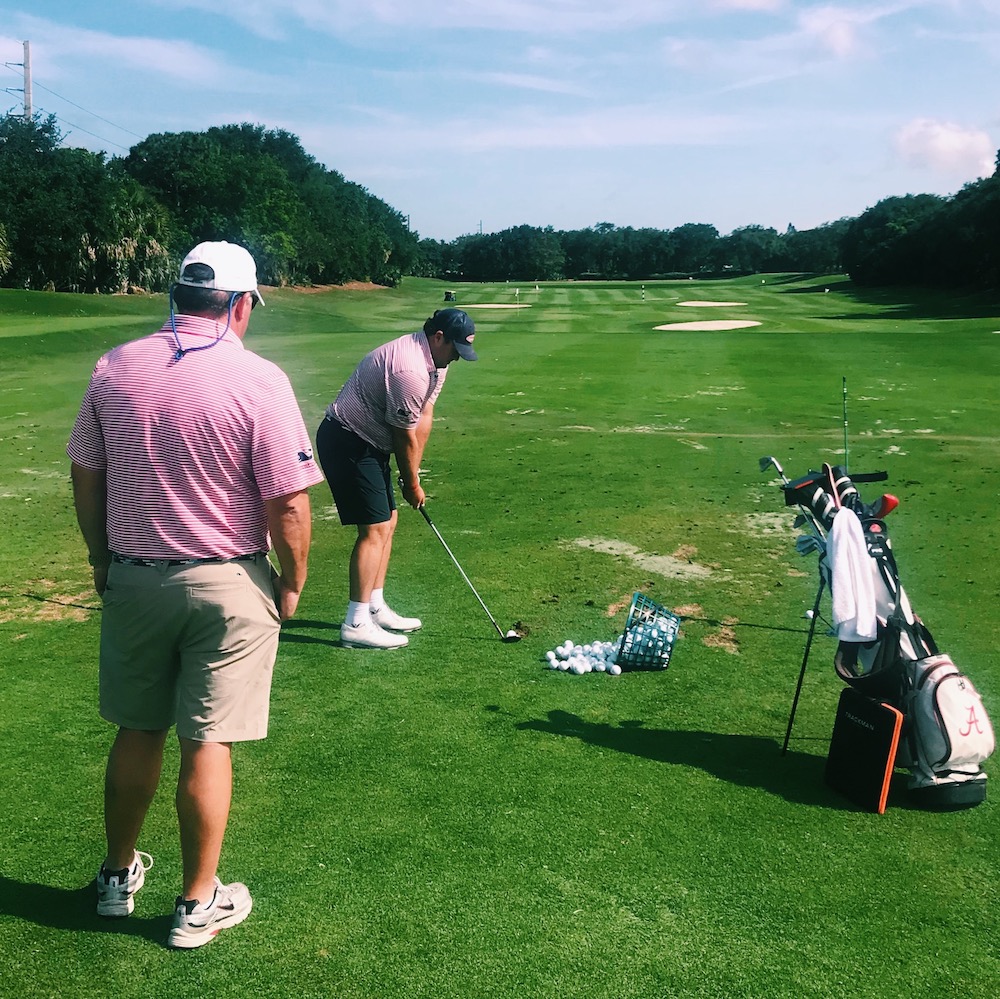 What do pros work on in their golf swing?

I’ve noticed some themes when hearing from tour pros lately on the most important things they work on.  It’s not the super complex or the out or reach for us average golfers.

We see every golf pro out there these days with a launch monitor behind them and maybe a couple instructors and consultants.

So what is going on?  Some science and knowledge incomprehensible to us average golfers?

The truth is probably very different the the story you’ve been telling yourself.

Lucas and coach Tony Ruggiero talk about one of the biggest changes they had to make to get Lucas striking the ball better again in the below podcast.

Lucas was struggling with a two way miss and couldn’t figure out why.  The push draw he loves to see just wasn’t showing up.

Instructor Tony Ruggiero and Lucas starting working together a couple years ago and immediately started in on the process of finding an answer.

Although they had him on a launch monitor, pressure plate, and 3d the biggest issue was… (drumroll please)  alignment.  His alignment was causing his miss to happen.

“We also focused on posture of hips and chest at address. Making sure he is postured correctly to hit the shot shape he desires which is a draw.

Some people don’t hit the shots they want because they’re set up to hit the opposite shot.”

Fun afternoon at Bears! Pure little draw here! @lucas_glover__ Even got to hang out with @lbobka

Too often we search for a difficult technical change that will magically help us get better when the answer is right there in the fundamentals we’ve ignored.

Placing our hope on a different “position” in the swing or new revelation from technology.  Although all these things are great we have to make sure the fundamentals are solid and the process of checking in on those never changes.

It’s not sexy but essential

One focus EVERY week before EVERY tournament is alignment and ball position.  And as Tony shares this happens every week with all the players he works with because changing cities and timezones on a weekly basis can easily throw players off their normal game.

One simple change you can make today?  Spend a quick session each week on the range testing and working on your alignment and ball position.

Tony is a big proponent of the rope set up you see below.  Simple to set up and really effective for checking what you’re doing.

If your trying to get an idea of where you’re lined up and starting the ball…. get a rope. @thedewsweeper

Maybe every few shots step to the range station next to you and aim towards a different spot on the range that you’ve been using with no feedback from an alignment stick or rope. And don’t just use your alignment device aimed at the same target the entire time.

You know how some holes just don’t feel good when you stand on the tee box.  Set up your rope left, right, move to the right and left side of the range and give yourself different looks so you experience a range of difference variations you have to learn to deal with.

In another recent conversation Tony and Tom Lovelady talk about a technique change that they worked on over the off season.  A backswing change to help him stay more connected

What Tony and Tom work on is surprisingly not complicated. Tom hits a fade, starting and ball left and having it fall a little right and used a simple drill this off season to get more connected.

Half way back they like the club to be on his hands or just outside. He has a simple feedback key to help him feel that. He uses a tee and puts it on the inside of his right armpit.

Not only would he practice that on the range but talks about using that same drill on the course so he could better transfer that feel to competition when the pressure is on.

Tom in his second year realizes the pressure that he faces each week and how essential it is to grind it out and get the most out of every round possible. So he’d play games and compete with friends during the off season to try and replicate what he was going to face during tournaments in the coming season.

Here’s the truth every golfer needs to know.  The principles of improving your game and swing aren’t locked away behind technology and expensive analysis.  Often it’s about sticking with the process of continually checking on the fundamentals.

Making your technique changes in a better practice environment and continually testing them under the pressure of competition.

Go out and get to work!

And subscribe to Tony’s new podcast TOUR COACH and follow the journey as he shares conversations with players and coaches out on tour.