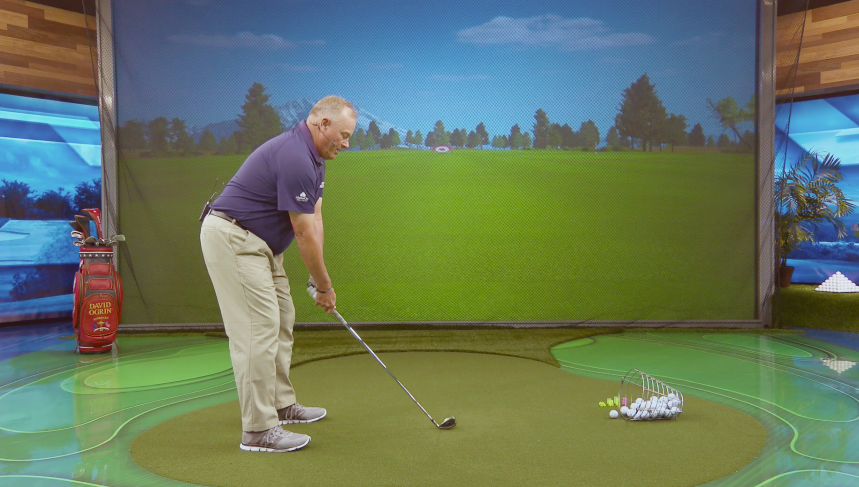 How do you create a great environment for a junior golfer to grow and develop into a PGA Tour player? David Ogrin tells his story and we learn some of the keys that helped him succeed.

Below are a few interesting insights and excerpts from David on his development as a junior / college golfer.

David had a different experience that the traditional “driving range” we have now. In fact the goals of the range were almost shifted.  Away from hitting as many balls as possible towards making sure you hit them all close together so you don’t have to run all over collecting errant shots.

The practice field was to the right of the first hole. I’d get there before I’d play with my shag bag and I’d add, hit a whole bunch of wedges from the top of the hill down to the bottom and I’d then walk down and pick them up.

Then I’d go across the creek and to an area where you could get drivers. Now you’re always sharing this space with other learners of the game. So you have your little Titleists or Wilson Staffs or whatever kind of balls marked up with your initials on it.

It really forced you to hit them in small piles because you didn’t want to chase them all over the place.

Another fascinating aspect of every pro golfers development is their experience with golf instruction.  The honest truth is it’s different for everyone.

My first instructor was a great professional by the name of Don Kennedy. Don Kennedy worked at Deer Path Country Club in Lake Forest, and Don was a good friend of my dad. The first lesson I took from Don was grip, stance, posture and ball position.

He changed me from a baseball grip to overlapping grip and had me take a shoulder width stance with butt end of the club pointed in my left pocket. We talked a little about ball position for irons and woods.

And the hour lesson went by and he said, you’ve got to go play.

That was my first lesson.

Second lesson was a year later I had the shanks and I came by and he gave me the same lesson as the first one.

The mindset was more like, how can I lower my handicap?

I watched my handicap, and sometimes you see questions on the forums going, how do we know when you’re getting better? And I go, what’s your handicap? It’s like nobody keeps a handicap anymore.

The standard, traditional handicap card was my teacher

David Ogrin is the Director of Instruction at David Ogrin Golf Academy. He played on the PGA Tour from 1983 to 2000and on the Champion’s Tour 2008 and 2009. David also has competed on the European, Asian, Canadian, and South American Tour with three wins on the PGA Tour and two wins on the South American Tour. His biggest win coming at San Antonio’s own Valero Texas Open in 1996 where he beat Jay Hass by one shot and Tiger Woods by two shots. David often says in jest, “I beat Tiger Woods so badly he has never come back”. Besides being and accomplished player on tour David comes to the Alamo City Golf Trail after two years as the Director of Instruction at Topgolf San Antonio where he created and ran the instructional elements of Topgolf San Antonio. Previously to that he coached one year of college golf at Texas Lutheran University as assistant to HC Tran. Before that David was the Director of Instruction at Three Crowns Golf Club in Casper, Wyoming where he created a seasonal golf program from scratch. David has also served as Director of Instruction at Rivercity Range in New Braunfels, and as General Manager at Maverick Golf Club in Floresville, Texas and Packsaddle Golf Club in Kingsland Texas. David is a graduate of the Vision54 Golf Coach of the Future program, a Certified Fluid Motion Factor Instructor, and Certified Putting Zone Instructor. David is certified to run Operation36 the leading developmental program in America. David is also a Life Member / Past Champion of the PGA Tour, and Life Member of the PGA of America. After his playing career David has set out to become a leader in golf development from the beginner stage all the way through professional golf. He uses many great programs such as SNAG, Deane Beman’s 6/90, Real Golf by Joe Bosco, DECADE by Scott Fawcett, and igrowgolf. His passion is in the development of the whole golfer and uses the materials of Vision54, Operation36, and Chuck Hogan. Playing lessons are the foundation of great learning and that is where David’s heart is. David Ogrin graduated from Texas A&M University in 1980 with a Bachelor of Science in Economics. He is married to Sharon Edwards Ogrin and they have four children and two grandchildren. David and wife family live in New Braunfels, Texas and attend New Braunfels weekly and Wurstfest annually.