The Difference Between Winning and Losing with Jon Stabler & Dr. Deborah Graham

We’re going to take a look at personality traits and see what we can learn by seeing what separates the elite golfers (who can win) and those that don’t. Our guests have done the testing only directly with players on the LPGA, PGA, and Champions Tour players.

We keep treating people like a machine, and we don’t address the controller.

If you don’t have control of yourself, your thoughts and your level of arousal, you have no chance.

Dr. Deborah Graham set out to see if there was a difference between the frequent winners and the other LPGA tour players in terms of personality traits.

She had them take the Cattell 16PF personality test and then took data on each players’ career record. Creating groups of the ‘frequent winners’, and then she had a ‘near champion’ group, who had won once or twice but been on tour for a while, and a ‘non-champion’ group who’d been on tour a long time and never won.

Then using statistical analysis software she analyzed and compared the groups and compared them by personality traits. The analysis said that on eight of the personality traits, the ‘frequent winner’ group was different from the other two groups, and the level of statistical distinction was at the 95th percentile and above. On the 9th trait compared, the level of statistical distinction dropped down to the 60th percentile. 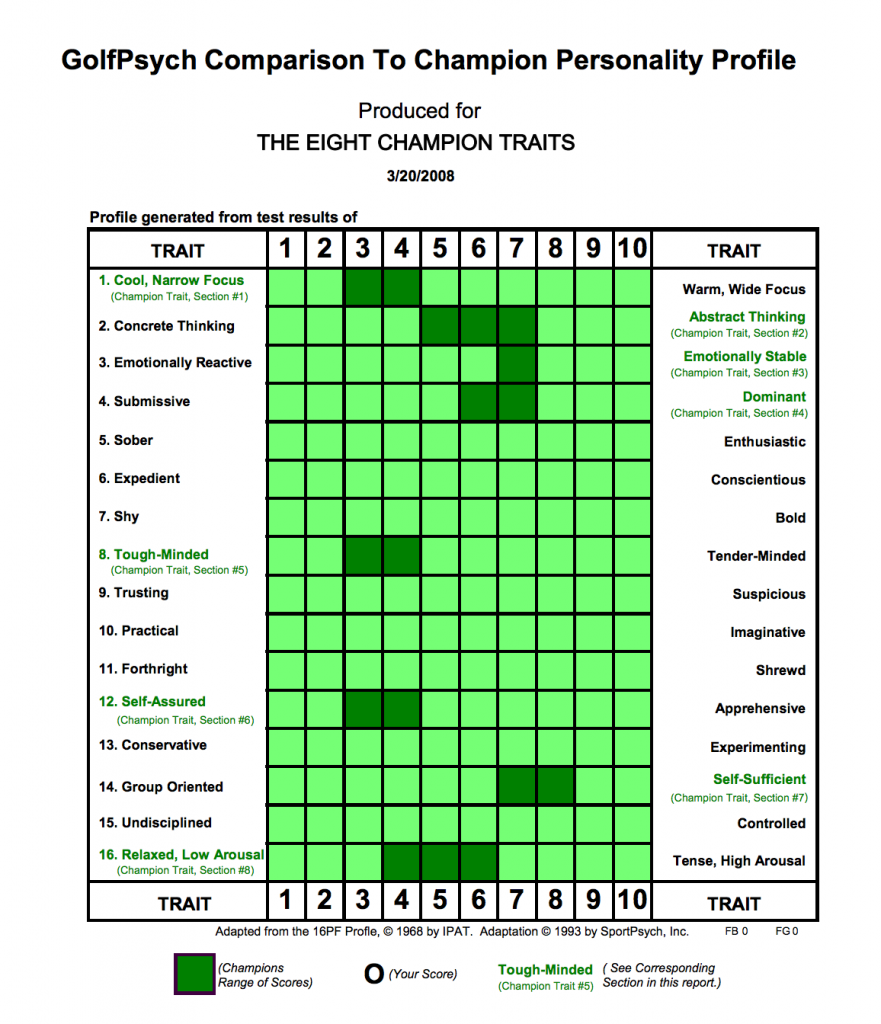 A little back story on Gary, he played 376 PGA tour events in his PGA tour career, he made 242 cuts, no wins.

After we got the results back of his assessment, it became somewhat obvious where his challenges were. He only lined up on two of the eight champion traits. He was off the mark on the other six, but there were two of those, one in particular that was the most damaging. 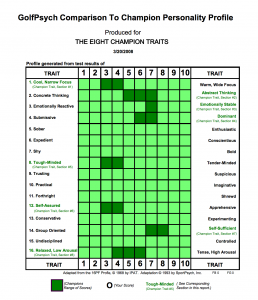 He measured very high on the abstract scale. The frequent winners on tour do not. They only measure slightly above average on the abstract side of the scale. His biggest challenge is quieting his mind and making a decision he can commit to in a short amount of time.

The old cliché is ‘paralysis by analysis.’

On tour, if you are the first to hit, you have 40 seconds by the time you get to the ball. You can’t think about all the options. You have to come to a decision pretty quickly and play the shot. If you are over the ball and still thinking about what you are supposed to do and what you need to do and think about whether you have the right target or whether you have the right shot, or making adjustments because the wind just came up, there is no way you are going to hit the ball well.

Once he understood that, he was able to keep it simple, game plan the night before, so all the thinking is done when in a more relaxed state. Secondly, listen to your intuition. What we found is that people high in the abstracts scale have really good intuition or first impressions. Go with the first impression. Don’t over-think it. Thirdly, on the putting green, read the putts from behind and below the hole and then stop. Don’t second-guess it, don’t go to the other side of the hole, it will just give you too much information, you’ll get confused.

With that work and basic mental routine information, Gary was able to go out and win in the rookie year on the senior tour. He won 2 out 17 events with the same guys he couldn’t beat on the regular tour. 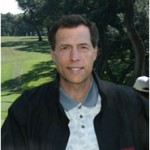 Jon Stabler is co-founder of GolfPsych. Along with being a co-researcher and co-author in the personality study of golfers and the resulting book, “The Eight Traits of Champion Golfers”, Jon has developed and conducts our GolfPsych group schools and Instructor training programs. He has worked with numerous competitive juniors, pros and college teams including TCU, SMU, A&M and Baylor.

Dr. Deborah Graham is a licensed Counseling Psychologist specializing in golf performance. Working with professional and amateur golfers from around the world, her client list includes over 380 players on the PGA, LPGA and Champions Tours, 21 of which she helped guide to 31 major championships. She was recently chosen by Golf Digest to their first Top 10 Sport Psychologists in Golf list!

Beginning in 1981 with a study of LPGA players she determined the statistical differences between champion and average players on tour, collecting data with the assistance of LPGA hall of fame member, Carol Mann. The findings helped earn her doctorate and discovered 8 critical personality traits for success in golf. This study was duplicated on the PGA and SR. PGA tours with the assistance of her husband, Jon Stabler, again finding the 8 champion traits and forming the foundation of the GolfPsych mental game training system. These studies and their Tour experience resulted in their book, “The Eight Traits of Champion Golfers”, published by Simon and Schuster in 1999.

Dr. Graham has also authored numerous articles for newspapers and golf magazines, published a mental game column and appeared on golf programs for a variety of networks including ESPN, Fox and CNN.