Scott Fawcett shares 3 course management and strategy myths far too many golfers believe. If you want a better strategy on where to aim and make smarter decisions around the course make sure to listen into this podcast!

One of the main concepts Scott teaches is that hitting a golf ball is more like shooting a shotgun over that of a sniper riffle. That means if you’re trying to hit a 140 yard shot you could hit it anywhere from 10 yards right or 10 yards left of the target. Before you hit the shot you don’t know exactly what is coming.

Hitting a golf ball is more like shooting a shotgun over a sniper riffle.

If you head to a golf course trying to not “miss it” in the wrong places you’re buying into one of the biggest myths of course management.

You can’t control where you miss and where you don’t! Most of us might try to aim at the hole and then hope that mid swing if something goes wrong we adjust and “miss it” in the right spot. Instead of this idea of missing it in the right spot we should change the way we approach our target spots on shots. Your target is the middle point where half your shots are left and half your shots are right. 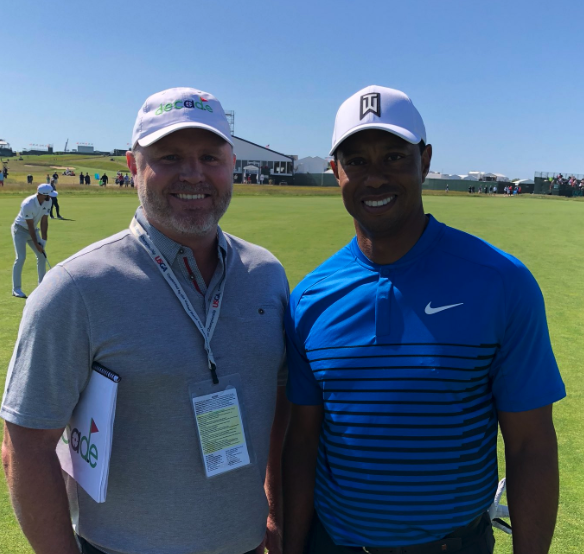 A former college golfer for Texas A&M, Scott Fawcett’s professional golf career never went as far as he wanted it to. An appearance in the 1999 U.S. Open and stints on the Web.com and Hooters Tours, among others, led Fawcett to create a new strategy to help take his own game to the next level.

After helping a junior golfer find success, Fawcett’s system gained a lot of attention and has since boomed. College coaches began hiring Fawcett to teach their golfers his system, and he has even been asked to help some PGA Tour players. The DECADE system became so effective that the NCAA banned Fawcett from teaching his seminar, considering it an “unfair competitive advantage.”

Fawcett lives in Dallas where he runs an electricity company he started in 2002 while sidelined with an injury, in addition to his golf life. He has caddied for many PGA Tour and amateur players since the creation of DECADE, such as Martin Flores, Beau Hossler and Sam Burns.